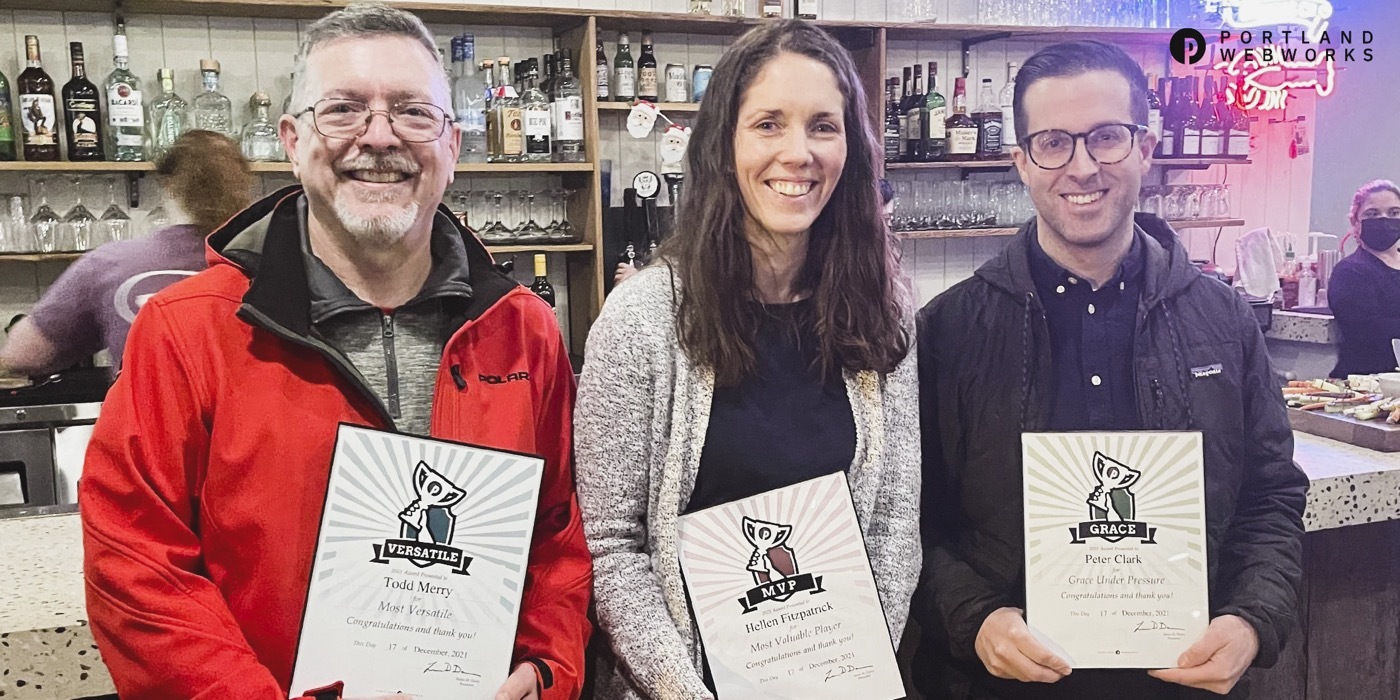 Portland Webworks (PWW) presented our eighth annual People’s Choice Awards at Luke’s Lobster on the waterfront in Portland, Maine, where we gathered to celebrate the year and the employees who made it a success. The top three employees with the most votes from their peers were awarded plaques and gift cards for the categories of Most Valuable Player, Grace Under Pressure, and Most Versatile. While all employees received accolades from their peers during the voting process, these three stood out for their contributions in 2021.

And the winners are….

The MVP goes to the employee who has been most essential to the company’s mission over the past year, and this is not Hellen Fitzpatrick’s first time at the podium. As a former People’s Choice Award winner, Hellen is consistently recognized by her peers for her outstanding level of dedication to her projects. The comment, “Hellen leads many projects at one time and appears to do it all with ease,” puts it mildly, to say the least.

“You’d be hard-pressed to find someone who had more of an impact on our organization this year,” says one fellow team member. “Hellen balances a variety of new and legacy projects and brings so much depth of expertise to each one. We challenged Hellen with a lot this year and she really stepped up to the plate.”

Says another: “Hellen juggles a lot of very demanding projects, and she does an incredible job keeping everyone aligned at a high level, as well as at the most granular detailed level. Her unique ability to manage projects like this makes her a boon to her teams as well as to PWW.”

Some of the projects Hellen has managed this year include:

This is the employee who is best known to be unflappable, and who demonstrates tact, consistent productivity, and exceptional grace when under pressure. It’s a definition that defines Peter Clark most years, but especially this year, as he unexpectedly took on the job of two people.

“Peter faced a highly intense year, and really stepped up to the challenge,” says a co-worker. “He continues to deliver beautiful, elegant designs and constantly strives for improvement, all while shouldering the vast majority of our graphic design needs.”

“Taking on the additional responsibilities has only seemed to push Peter to be more productive and creative,” a team member added.

“Peter’s design contributions range the entire spectrum of client work, as well as non-client PWW work,” one employee notes. “The way he receives feedback on his design work never ceases to impress me. Taking critical feedback on a creative piece can be challenging, and he does so extremely admirably. He listens carefully and remains unflappable, staying focused on the changes that need to be made, and always making them to the highest standard.”

Projects that benefited this year from Peter’s design expertise include:

Under a new name this year, this awards goes to the person who stands out for the ability to step in when needed, no matter what the need is, and go above and beyond to get the job done. This is exactly what Todd Merry has done this year on many of his projects. To put it simply, he’s been asked to wear many hats, and he wears them all with style.

“We’ve thrown a lot at Todd this year and he hasn’t flinched,” is how one coworker put it. “Whether it’s becoming our GA expert or diving into site building and development, the flexibility he has shown has been so important to our projects.”

Another says, “Todd stepped up and into the Drupal site building role when Covid made it difficult to find resources, while continuing to support several projects QA needs.”

“Todd has been a fixture for this organization for a long time,” a team member noted. “Don’t let his tenure fool you into thinking he’s an old dog without any new tricks. Crossing over to the dark side of Drupal demonstrates bravery and of course, versatility!”

Projects Todd worked on in this year include: