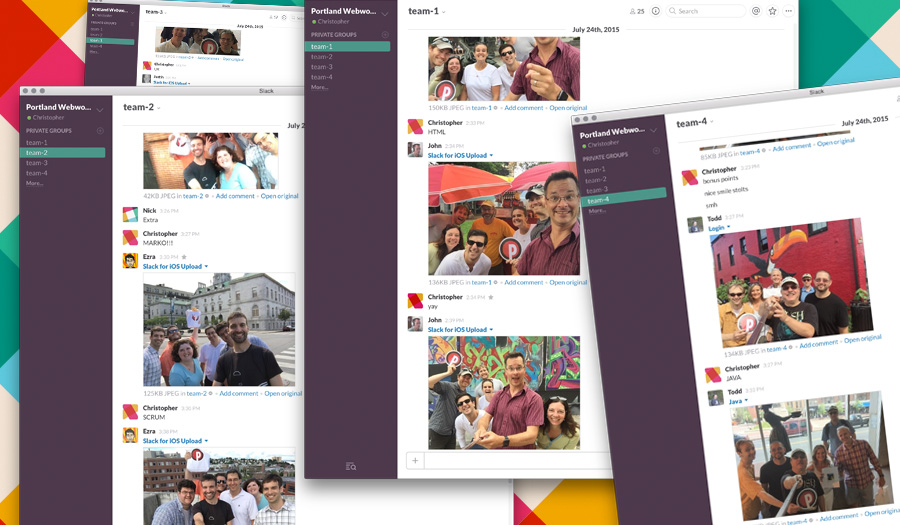 Using Slack For Some Company Fun

How we used the messaging tool to run a scavenger hunt

Last Friday our company held its first ever Scavenger Hunt, with a little help from Slack, the messaging app that has been transformed the way we work here at Portland Webworks.

I’m sure you’re all familiar with the concept of a Scavenger Hunt, where participants follow a series of clues to collect items (or take photos) as proof that they solved the clues. In a competitive situation there’s usually a time element too, just so you can figure out who won. Our hunt followed this traditional format for the most part, but given our team’s capacity to find, ahem…innovative solutions to complex challenges, we decided to keep everyone honest by requiring them to send in proof of solving one clue before they could move on to the next.

With four teams beating the streets of Portland, keeping all that information straight was going to be a challenge, but thanks to Slack’s and its Private Group feature, Christopher Prinn, our dungeon master Creative Director, was able to keep each team on task without tipping off the others.

So, after a delicious lunch, courtesy of Figgy’s Catering, each team set out armed with a bag of sealed clues, a selfie stick, and a smartphone hooked up to their respective team group in the Slack mobile app. Each bag of clues also included some fake clues to foil attempts to jump ahead, so after taking and submitting their clue-solving-selfie in the Slack channel, they had to wait for the next clue from scavenger-central before they could move on.

Thanks to this Slack-based command and control each team was able to complete all of their clues, although a few suffered time penalties when they asked for hints, and one team missed out on their time-bonus side quests because they failed to read the rules completely. In the end, they all returned safe and sound, ready to tuck in to some leftovers and share their war stories.

If you haven’t checked out Slack yet, we highly recommend it. Not only is it great for scavenger hunts, but all other forms of team collaboration, whether project- or skill- based, as well as good old fashioned direct messaging. We’ve been using it for more than a year and it’s centralized the entire company on a single platform, and cut down the need for a lot of email and meetings, which everyone is a fan of!